Welcome to the official Web site of the C.A.I.S.O. Steel Band. Stop by, listen to some music, learn about the history of our band and our current gigs, a nice place to be on the Internet. Professional (a.k.a Steel Pan) Musicians in Washington, DC, Maryland and Virginia.

CAISO (pronounced kī-ē-sō) Steeldrum Band  has been performing since 1979.  Our eight founding members, all formerly with the Trinidad & Tobago Steel Band of Washington, DC, had performed previously with well-known groups in Trinidad and the West Indies.  The group’s varied repertoire includes Soca, Calypso, Reggae and a lil Latin Jazz.  We are honored to have performed throughout the DMV and across the pond in Kosovo!

Our founders are David Zephrine and Michael George, initial members respectfully include Sam Brown, Godfrey Clark, Oswin Finley, Carlyle Oliver, Broderick Robinson and Roger Grenidge. The group first gained its fan base by performing at the Pier One Club in Annapolis and the Ocean Club in Ocean City, MD.  Throughout the years CAISO has performed at many of the top venues in the Baltimore-Washington area such as Merriweather Post Pavilion, Wolf Trap, Smithsonian Institute, Congressional Country Club and Embassy Row in DC just to name a few.

CAISO received praise for its performance of the U.S. National Anthem at the 1982 season opener of the then Washington Bullets Basketball franchise against the Philadelphia 76ers.  The band performed as the opening act for the Beach Boys concert on August 27, 1995 in Harve de Grace, Maryland. Other notable performances include appearances on network television stations as seen on Fox 5 DC morning show 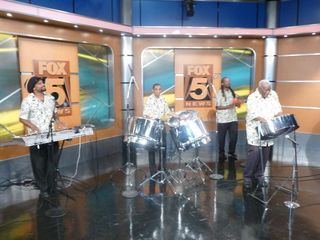 Our one of a kind ensemble infuses steelpan music inspired by artists such as Len "Boogsie" Sharp, Leon "Smooth" Edwards, Andy Narrell as well as legends like Bob Marley, Mighty Sparrow, Jimmy Buffet, and other popular artists.  CAISO brings sound to life by arranging melodies, harmonies, and rhythm into festive music.  This professional band always entertains as they bring the Caribbean to you!

To see a few comments from our many satisfied customers, look here: CAISO Delivers SuperbEntertainment.

If you would like a free quote and more information about booking CAISO for your event, please see our Booking Info page: Booking Info.

Promote Your Page Too